By Brian Murphy and Brian Eastwood

Seeking to liberate the industry from its self-created morass of siloed data and duplicative quality reporting programs, the Department of Health and Human Services (HHS) issued 1,883 pages of proposed changes to Medicare and Medicaid. It renamed the Medicare and Medicaid Electronic Health Record (EHR) Incentive Programs (known by all as Meaningful Use) to Promoting Interoperability Programs (PI).

As widely reported, it would eliminate some measures that acute care hospitals must report and remove redundant measures across the five hospital quality and value-based purchasing programs. It would also reduce the reporting period to 90 days. HHS will be taking comments until June 25, 2018.

HHS believes that APIs will solve all of the problems that patients and healthcare stakeholders have with data access. HHS also seems prepared to declare that TEFCA compliance and 2015 Edition CEHRT guarantees that those APIs are in place.

Certified EHRs as Enablers of Interoperability 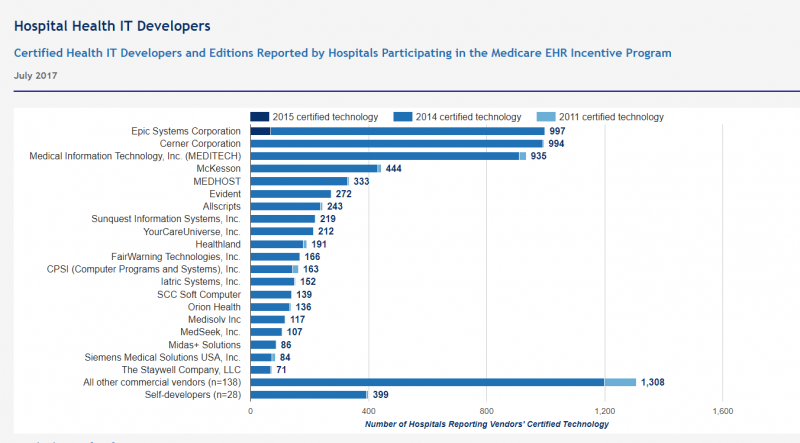 Current adoption levels by HCOs are undoubtedly better, and many vendors have 2015 Edition technology ready to go, but hospitals can only change so fast. The rush to get hospitals on the most current edition has to do with the most relevant difference between the 2014 and 2015 Editions – the API requirement. APIs will be the technical centerpiece of better, more modern interoperability but adoptions levels are still low. APIs, by themselves, offer the promise of better data liquidity. For this promise to become a reality, healthcare stakeholders need more than just a solid set of APIs.

This is a nice thought, but it will take some heavy lifting to pull this off. For starters, HHS doesn’t even have a definition of “standard charge” and is seeking stakeholder input before the final rule is published. HHS also must determine how to display standard charges to patients, how much detail about out-of-pocket costs to include (for patients covered by public and private insurance), and what noncompliance penalties are appropriate.

Above all, there’s the thorny issue of establishing what a standard charge is in the first place. Charges vary by payer. Can a hospital truly state, without a doubt, the cost of an MRI or a colonoscopy? Most cannot – and technology alone will hardly solve this problem.

Patients (Not) Using Their Data

The existence of APIs will stand in the stead of the old view/download/transmit (VDT) requirement. Regarded as one of meaningful use’s most troublesome and fruitless requirements, this rule has been shed by HHS because of “ongoing concern with measures which require patient action for successful attestation.”

VDT is one of several MU Stage 3 requirements pertaining to patient engagement – along with providing secure messaging or patient-specific educational resources – that HHS has proposed dropping, under the pretense that it is “burdensome” to healthcare providers. While hospitals have struggled to get many patients to participate, the VDT requirement set the bar at one patient out of an entire population. What’s more, dropping the requirements fails to take into account how burdensome it is for patients to try to access their data, communicate with their physicians, and learn about their conditions and treatment options. It is also contrary to CMS Administrator Seema Verma’s remarks, first at HIMSS18 and again this week, indicating that the agency seeks to “put patients first.”

HHS says that third-party developed apps that use APIs will deliver “more flexibility and smoother workflow from various systems than what is often found in many current patient portals.” Whether such apps deliver “smoother workflow” is not a foregone conclusion.

HHS proposes “a new scoring methodology that reduces burden and provides greater flexibility to hospitals while focusing on increased interoperability and patient access.” The proposed scoring methodology uses a 100-point system (explained over 24 pages) in which attaining a score of at least 50 means there will be no Medicare (or Medicaid) payment reduction. 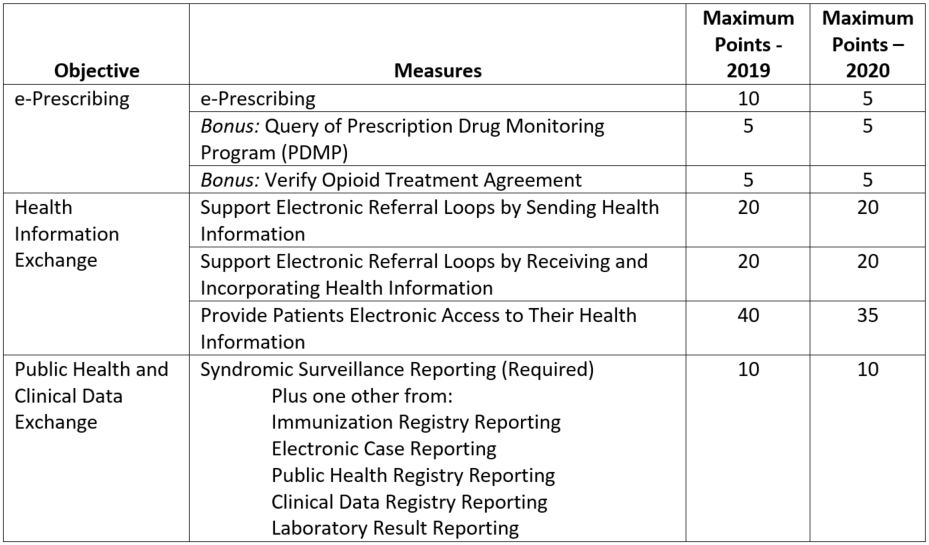 HHS is also mulling whether to abandon these measures altogether in favor of scores calculated at the objective level.

The biggest regulatory effort in recent months related to interoperability, other than this proposal, has been ONC’s proposed Trusted Exchange Framework and Common Agreement (TEFCA), required under the 21st Century Cures Act. TEFCA, well along in the planning stages, is a new set regulations from ONC whose goal is to catalyze better data availability using APIs. HHS in this regulation wants public comment on whether participation in a TEFCA-compliant network should replace the process measures in Health Information Exchange objective. Stated another way: Should TEFCA compliance replace 80 percent of the score for PI (75 percent in 2020)?

But there are, as yet, unanswered questions about TEFCA:

HHS is also considering doing away with Public Health and Clinical Data Exchange objective. It floated the idea that a provider that supports FHIR APIs for population-level data would not need to report on any of the measures under this objective. This would replace 90 percent of the score for PI (85 percent in 2020) when combined with the TEFCA knockout.

The specific API mentioned, called Flat FHIR and still in development, will probably contribute to part of the complex process of public health and registry reporting. This activity currently requires highly skilled data hunter-gatherers, usually with clinical credentials. In many organizations, these hunter-gatherers manually sift and collate multiple data sources to meet the varied requirements of the recipients of different registries. Flat FHIR, assuming it were production-ready, will certainly help, but it is unlikely that it could provide all, or even most, of the information needed for the range of public health reporting programs.

Mandating Interoperability with Other Regulations

HHS also asks the industry how it could use existing CMS health and safety regulations and standards to further advance electronic exchange of information. It is ready to change Conditions of Participation (CoPs), Conditions for Coverage (CfCs), and Requirements for Participation (RfPs) for Long Term Care Facilities regulations to this effect. It wants to know whether requiring electronic exchange of medically necessary information in these regulations would move the interoperability needle.

HHS believes that APIs will solve all of the problems that patients and healthcare stakeholders have with data access. HHS also seems prepared to declare that TEFCA compliance and 2015 Edition CEHRT guarantees that those APIs are in place. It roundly ignores the mesh of incentives that make stakeholders unwilling to share data and patients unable to access data. The industry has cried out for less process reporting and better insight into outcomes for years. This will accomplish the former but set the industry back with respect to the latter if interoperability is declared solved based on technology alone.