Over the course of the last 18 months artificial intelligence (AI) has matured to the point where there are several viable vendor options for nearly every use case.

AI dominated every aspect of the annual gathering of the Radiological Society of North America (RSNA18) in Chicago. Self-described ‘machine learning’ vendors with a presence on the conference floor more than doubled from 49 in 2017 to over 100 in 2018, 25 of which were first-time presenters. 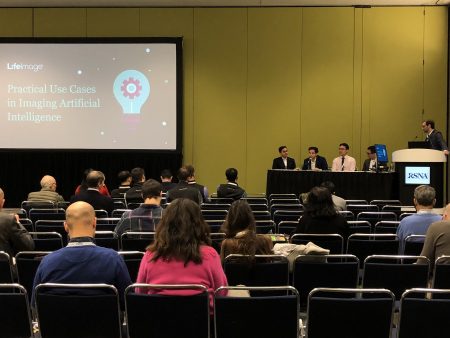 I moderated a panel hosted by Life Image on practical uses cases of imaging AI and was blown away by the conversation that ensued, particularly what I learned about how the veteran radiologists feel about being “replaced.” During the question period, a senior radiologist approached the microphone to address a comment made by a more junior radiologist on the panel which he interpreted to be too pessimistic about the potential for AI. To paraphrase the elder, “Listen here sonny, you are too young to fully appreciate what you don’t know, and you don’t know how many mistakes you are truly making on a day to day basis. 1-2 percent error rate due to fatigue alone. WE NEED AI to save us from ourselves.”

Not all old school radiologists are so optimistic: “When you’re going up the ride, you get excited,” noted University of Chicago radiologist Paul Chang said during his workshop on AI. “But then right at the top, before you are about to go down, you have that moment of clarity—‘What am I getting myself into?’—and that’s where we are now. We are upon that crest of magical hype and we are about to get the trench of disillusionment… It is worth the rollercoaster of hype. But I’m here to tell you that it’s going to take longer than you think.”

The cloud fades to the background

Last year, the major cloud vendors each had a significant footprint at RSNA, but this year the two largest, Amazon and Microsoft, were nowhere to be found. Only Google Cloud had a significant, if smaller than last year’s, presence. Donny Cheung, one of the Google Cloud team leaders, was on the panel I moderated and his message to the imaging community could be boiled down to two words: storage and compute. No dashboards or toolkits or tensorflowing, just storage and compute, a smart and refreshing strategy amidst the obvious feature creep many other vendors suffer from.

Over the course of the last 18 months artificial intelligence has matured to the point where there are several viable vendor options for nearly every use case.

While it was surprising that Amazon had no noticeable presence, it was even more surprising to find Facebook making news on the conference floor. Facebook AI Research (FAIR) has partnered with the Center for Advanced Imaging Innovation and Research (CAI2R) in the Department of Radiology at NYU School of Medicine and NYU Langone Health to release the fastMRI, an open source dataset for training and testing machine learning algorithms to reconstruct MRI images.

This offering is roughly equivalent to similar X-Ray and CT datasets released by NIH. Given that algorithms ALWAYS significantly outperform on all metrics against the data used to train them versus new data, the industry needs independent validation of AI claims so it is unlikely that Facebook moves the needle with this offering.

PACS vendors want to get in on the AI action by positioning their existing products as AI marketplaces or platforms (Philips HealthSuite Insights, PureWeb, LifeImage, GE Edison, FujiFilm REiLI, Nuance AI Marketplace, Blackford Analysis). Nuance has shown there is a viable market for these platforms, counting 40 startups and health systems among user groups for its marketplace. There is no shortage of startups taking this approach (MDW, Envoy.ai, Medimsight, Lify, Fovia). Imaging hardware vendors refused to be left out too, with many partnering with AI vendors to embed their algorithms on the “edge.”

International AI startups, particularly from Israel, China, and South Korea, stood out from the crowd in terms of their approach to product design, but only the companies from Israel have been able to break into the US market so far. One Korean company voiced frustration with the FDA, saying it couldn’t understand what was wrong with their application. I wonder if it underestimates the importance of using data from US patients to validate their algorithms?

Some cautionary tales were told…

Not everything we learned about AI at RSNA was positive. A paper presented at the conference showed that neural networks could be used to insert malignant features into mammograms giving a false positives, and then reverse the alterations without detection. Even scarier, it took about 680 images to train the algorithm that executed the adversarial attack. Cyberattacks have been increasing in healthcare over the last couple years, but mostly just for taking data hostage and demanding ransom to get it unencrypted. This type of attack would represent a frightening new paradigm in cyber-vulnerability, and it is certainly not difficult to imagine ways this could be exploited to make money. It could be used for a different sort of ransom, with every image appearing to show cancer until a ransom is paid and the adversarial attack is reversed. Another conceivable way this type of attack could be exploited would be falsifying data for clinical trials.

One response to “Recapping RSNA(i)18”