Medicare Advantage (MA) continues to show the most robust growth of any line of business for health insurers. Overall MA growth was 7.8% year over year in July 2018, reaching 21.4 million, while Part D enrollment grew to 25.5 million. To better serve these members, health insurers are considering several strategies – one of which is operating primary care clinics that exclusively focus on Medicare patients.

On June 19, Humana (NYSE: HUM) and Walgreens (NASDAQ: WBA) jointly announced a partnership under which Humana will initially operate two senior-focused primary care clinics inside Walgreens retail stores in the Kansas City, Missouri area. The clinics will open under Humana’s Partners in Primary Care banner; they will join four existing Kansas City area clinics, opened in 2017, which share the same name. The two co-located clinics are slated to open in the fall and occupy ~2,500 square feet (~25% of an average Walgreens store).

These clinics will have their own separate entrance, with an exit into the Walgreen’s pharmacy. While the companies are not sharing details on the nature or economics of the partnerships, Humana did note that it will operate the clinics and staff the doctors and accept a variety of Medicare coverage, including fee-for-service, MA, and Medicare Supplement plans. The clinics will serve seniors exclusively; Humana expects they could take 3-4 years to reach capacity. The companies noted that the collaboration could expand into other markets over time.

This partnership shows how both Humana and Walgreens are focusing more heavily on their longer-term clinical strategy and responding to other competitors “front door to care” strategies.

For Humana, this pilot is a logical extension of the company’s longstanding commitment to an integrated care model that more closely aligns primary care, pharmacy, in-person health plan support, and other services for Humana’s MA and Part D members. It also follows recently acquired minority/joint venture stakes in home health and hospice providers Kindred and Curo.

Humana believes the convenience of the retail pharmacy model should help make primary care more accessible to seniors. In addition to the co-located Partners in Primary Care clinics, Humana representatives will work in select other Walgreens stores to provide general assistance on health-related services to Humana Medicare members and other customers. These in-store “health navigation” services will be available at no cost to members inside the Walgreens pharmacy store (as opposed to the co-located clinic).

The Partners in Primary Care model offers integrated services that “go beyond addressing acute and immediate health issues, and [focus] on developing long-term relationships with patients living with chronic conditions.” In addition to the four wholly owned, standalone clinics that opened in Kansas City in 2017, Humana operates two clinics under the Partners in Primary Care banner in Greenville, SC and another in Gastonia, NC.

All of these providers are risk-bearing for Humana, as will be the locations co-located with Walgreens; the latter may or may not bear risk with other payers, depending on the contracts struck with third parties. Importantly, the collaboration with Walgreens does not preclude Humana from striking any other potential arrangements with other retailers. Humana will also continue to work with Walmart on a partnership that encompasses a value-oriented, co-branded Medicare Part D plan as well as other in-store consultative efforts.

Walgreens has recognized the need to make changes to its store format and is exploring various partnerships that will add new services. This announcement with Humana appears consistent with a strategy of incremental, capital-light partnerships with other healthcare services providers to convert its stores away from retail toward a more comprehensive healthcare offering.

Others within the healthcare continuum have received more attention for their efforts to provide a more convenient location to access healthcare services – namely CVS Health with its acquisition of Aetna. But Walgreens has been actively growing its suite of healthcare services that can be offered both inside and outside the retail pharmacy: Partners in Primary Care with Humana, MedExpress with UnitedHealthcare, LabCorp PSCs, Walgreens Hearing, Walgreens Optical, and its new Find Care Now telehealth service.

In addition, Walgreens is piloting a set of differentiated service offerings in the Gainesville, FL market. These include Walgreens Plus (a subscription-based, in-store savings program with an option for free same-day prescription delivery) as well as an in-store partnership with Sprint for phone purchase and activation.

It appears that any new store concept is very much a work in progress, and Walgreens expects to update investors on its store strategy in about a year. We expect Walgreens to test the “Partners in Primary Care” concept in these two test stores before making a decision to roll it out more broadly, as with its other pilots. 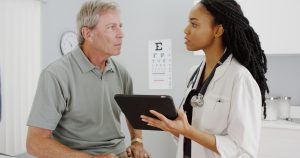 We see four key questions about the Humana-Walgreens partnership.

Will it actually bend the cost curve?

Assuming a patient panel of 500 to 700 MA patients per physician at these new clinics, they are likely to only serve 1,500 to 2,000 Medicare patients in addition to the four existing Partners in Care clinics in the Kansas City area. Humana currently supports more than 65,000 MA and Part D prescription drug members in the Kansas City area. Will those few thousand beneficiaries regularly seeking care at Walgreens be enough to decrease hospital admissions and ultimately the medical loss ratio?

How quickly will the model expand?

While Humana has acknowledged that retail could be a powerful distributor of provider capabilities for its MA members, its view that model as still unproven. Humana expects to experiment with smaller, more targeted retail initiatives vs. broader ones, at least in the near term. Walgreens as well appears to be in no rush to rapidly expand this concept either, with its pilot starting at two sites and expected to last at least 12 to 18 months.

Will they build or buy an EHR?

It has not been disclosed if Partners in Primary Care is using a commercially available EHR or choosing to build its own product. Some primary care clinics focused on the MA population, such as One Medical, use a commercially-available EHR (eClinicalWorks). Others such as ChenMed and Iora Health have chosen to build much, if not almost all, of their own IT offerings, including a proprietary EHR. The startups that have built proprietary solutions felt that commercially available EHRs were not well-suited for their patient populations for several reasons (such as insufficient HCC coding and documentation support); as long as they only served the Medicare population, they found they were better off building and maintaining their own EHR.

We expect this type of coordinated care services model for MA beneficiaries to expand to other geographies over time. While this partnership is immaterial to either Walgreens’ or Humana’s financials over the next few years, it shows how both companies are focusing more heavily on their longer-term clinical strategy and responding to other competitors “front door to care” strategy for MA – especially CVS-Aetna and UnitedHealthcare-WellMed.