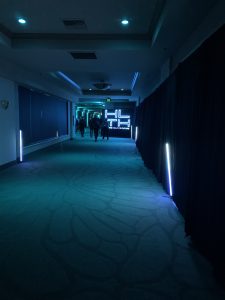 Six thousand movers and shakers in healthcare came together in Las Vegas for HLTH, a conference in its second year that has obviously attracted quite a following. The best characterization of this event is a mini JP Morgan (the uber-large annual event held in January) devoted exclusively to digital health. Not sure how they did it, well actually I do know – a lot of money was invested to pull HLTH off – but in doing so, the organizers successfully brought together senior executives from across the digital health spectrum under one roof. You had pharma, payers, providers, retail, med device, investors and of course a multitude of IT vendors, most of them smaller start-ups.

Surprisingly, then again maybe not, did not see any real representation of the traditional health IT vendors one finds at legacy, lagging, indicator conferences such as AHIP, HIMSS, and others of this ilk. However, Optum did make a big show of it and was likely one of the larger sponsors of this event.

As one walked towards the conference through the MGM Grand, eventually one wound their way down a long, dark corridor of blue lights rounding a corner into the brightly lit registration area with a DJ playing upbeat music. As one friend put it to me:

John, that dark corridor led us to an alternate reality where truth is suspended.

While HLTH is an extremely well-organized event with numerous tracks and sessions that at first blush appear highly relevant and current, (certainly more so than anything I’ve experienced at most other healthcare conferences) in the end, far too many sessions echoed the common refrain about how so and so or such and such was going to disrupt healthcare. Yawn. There were also those incumbents of the industry talking consumerism and engagement that I found at times to simply be delusional at best or disingenuous at worse.

Not that we do not need disruption and more consumer/patient-centric models – far from it. But the healthcare industry is so mired in a tangled, convoluted web of its own making that no incumbent in this industry will rock the boat too much for fear of losing their piece of the $3T+ annual healthcare spend in this country. Even most of the self-proclaimed disruptors just want to get their share of said pie as well.

But countering this, and arguably the best talk was that of entrepreneur Mark Cuban. Cuban announced to this audience of healthcare leaders that they are not truly disrupting their businesses and burning that tangled web to deliver better, more accessible and affordable care. Maybe that is where true disruption will arise from – a savvy, smart entrepreneur such as Cuban with deep pockets, a desire to do good and who cannot be bought out or compromised.

Beyond the sessions and presentations though, the real value of this event and where I spent the majority of my time was simply networking and discussing the state of the industry. Highlights of those discussions include:

HLTH is a tad too glitzy for my tastes and I would have preferred more challenging discussions and questions from panel moderators. Yet, for an event in only its second year of existence, it is impressive and there are many intelligence nuggets to collect by attending – I’ll go next year. I also really appreciate the efforts that organizers took to bring together the entire healthcare sector under one roof to discuss how digital health will change the future of care delivery.

This is the correct way to view digital health and by extension health IT. It is not about providers, it is not about payers or just pharma, a view by and large that continues to this day. As HLTH infers, it is time to start thinking about how we use health data across all sectors of this industry to improve the delivery of care and ultimately patient outcomes.

7 responses to “HLTH: An Alternate Reality”