Allscripts — Stabilize, then Proceed with Innovation

At the recent Allscripts Client Experience (ACE, #ACEHHS18) conference, the company gave us a day and a half deep dive into their current strategy and initiatives. As much as Allscripts positioned themselves as the innovative leader among the leading EHR vendors, the fundamental reality was far simpler. This is a company that is seeking to stabilize its base, and that is a good thing. 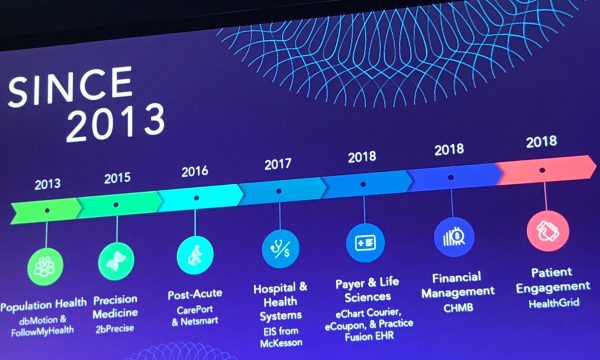 As most readers know, when CEO Paul Black took over the reins at Allscripts he had quite a mess on his hands. Previous management had grown the company through a series of acquisitions, but little attention was paid to how these various acquisitions would be stitched together to provide a comprehensive and cohesive EHR that extended from hospitals (acute) to small practices (ambulatory).

Clients were not happy, and Allscripts increasingly lost ground to both Cerner and Epic.

Under Black’s leadership losses have been stemmed, costs brought into alignment, and the bottom line has improved. Today, Allscripts has an acute to ambulatory EHR solution in Sunrise, which now represents roughly half of Allscripts’ annual revenue.

The company has also continued its acquisition strategy, picking up two other EHR platforms –  McKesson’s EIS business (see our original take here) and Practice Fusion. While hearing little about Practice Fusion at this event – after all it was focused on Allscripts’s acute clients – we did hear from a number of former McKesson (Paragon) clients that they were quite happy to have Allscripts as their new parent. As one Paragon customer told me:

“We have been ignored for years. McKesson failed to address known problems with their software. At least now we have a voice and Allscripts is making progress.”

In another session with two Allscripts customers, each related their thorough evaluation and due diligence research of current acute care EHR solutions. Their conclusion: The EHR has become a commodity with comparable functionality across all major aspects that were important to them. Since EHR software is no longer a key differentiator, the relationship with the vendor and the need to minimize disruption to frontline users of the software become paramount. This is likely true across the industry and why the long purported EHR replacement market never materialized.

The EHR has become a commodity with comparable functionality across all major aspects that were important to them. Since EHR software is no longer a key differentiator, the relationship with the vendor and the need to minimize disruption to frontline users of the software become paramount.

In a brief conversation with Black, he was passionate in stating that he wants this company to be seen as the true innovator of the big three EHR vendors. He pointed to their precision medicine efforts with 2bPrecise, a young company started by the founders of HIE vendor dbMotion, a company Allscripts had acquired several years ago.

2bPrecise is now embedded within EHR Sunrise workflow and the company is working with six beta customers, including the Mayo Clinic. Today, Allscripts is the only EHR company that offers the physician the ability to match medication treatment protocols with a patient’s genomic information (e.g., how well a patient can metabolize a given medication) – pretty futuristic and promising work. But there is a fly in the ointment: who pays for this second order derivative to define patient-medication matching? No clear answers yet, though the move to value-based care (capitation) may provide accelerated adoption for certain, complicated diseases (behavioral health, cancer, etc.).

Another innovation they announced at ACE was allowing clinicians from within Sunrise to directly order (prescribe) a Lyft ride for a patient (original partnership announced in March). The use cases for such are numerous, from setting up an appointment (25% of low-income patients cite transportation as a leading cause of missed appointments) to taking a patient home upon discharge. Nice feature for both clinicians and patients.

Lastly, the company is in the process to move its core portfolio of products to a common client user interface (UI) based on progressive web architecture. This effort is in conjunction with their move to hosting their solutions on Microsoft’s Azure platform. Note: the move to hosted cloud services has taken the healthcare IT sector by storm. Three years ago, few CIOs were willing to go “off-prem.” Today, there is literally a tsunami of interest among CIOs looking to off-load the care and feeding of their EHRs and other applications.

The EHR market is dead in the U.S. To grow, one must either acquire other EHR vendors and leverage their maintenance revenues aggressively while cutting SG&A costs or look to the next generation of solutions and services the client base will need.

Allscripts has done a little of both but what concerns me most is their lack of a clear and compelling solution suite to support the migration to value-based care. Their messaging around population health (CareInMotion) was generic and this solution suite to support value-based care modalities still lags competing solutions. They are working to rectify these shortcomings, but they are slow in coming.

Their analytics story, quite surprisingly, was nowhere in evidence – little discussion during the sessions I attended nor highlighted in their product pavilion. Contrasting this with what I experienced this past week at Cerner’s own user conference, CHC, or at Epic’s UGM in late August, was striking.

The innovative efforts at Allscripts are heartening, especially those regarding patient engagement. Yet these efforts will not keep the lights on for most healthcare organizations as we migrate to data-driven care delivery models. The industry migration of clinical care from an art (little to no data) to a science (data-driven) is readily apparent – Allscripts’ own story on this, however, is currently not quite as clear.

2 responses to “Allscripts — Stabilize, then Proceed with Innovation”